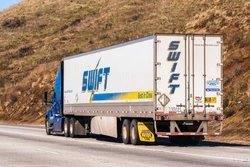 The combined company will feature leased or owned assets that number 20,000 tractors, nearly 75,000 trailers, and driver force of more than 22,000.

“In seeking our first LTL partner, we had three main requirements – the scale for entry with significant market share, the profitability and management depth to operate independently and provide a platform for compelling growth opportunities, and a world class culture,” Knight-Swift CEO Dave Jackson, said of the billion dollar-plus acquisition. “We were excited to have identified AAA Cooper as a partner that meets all three requirements, and I couldn’t be happier to finally find the right time for both of us to create a partnership. This transaction firmly positions us as a meaningful player in the LTL space, where we intend to grow both organically and through future acquisitions.”

AAA Cooper was privately held. Knight-Swift is traded on the New York Stock Exchange under KNX.

AAA Cooper CEO Reid Dove has been named to the Knight-Swift board of directors and will continue to serve in his role as head of AAA Cooper.

“Joining the Knight-Swift team is an exciting combination for the AAA Cooper team members and customers. It will allow us to pursue new opportunities and accelerate our growth,” Dove said. “We will continue to operate as an independent company, headquartered in Dothan, Alabama, and will do so with the support and partnership of the strongest provider in the full truckload space. This is the fusion of two excellent companies in their respective sectors of the transportation industry, which makes this a win for our people, our customers, and for the newly expanded Knight-Swift team.”

In the deal, Knight-Swift picks up a network of approximately 70 facilities (90% owned, with the remainder leased), consisting of a terminal door count of more than 3,400, strategically located across the southeastern and midwestern United States. AAA Cooper’s fleet includes nearly 3,000 tractors and 7,000 trailers, which execute at an operating ratio in the high 80’s to low 90’s. The company’s workforce includes approximately 4,800 associates.

Knight-Swift has been on a spending-spree of late, having last month acquired UTXL, a third-party logistics company, specializing in over-the-road full truckload and multi-stop loads throughout the United States, Canada, and Mexico, for approximately $22.5 million.